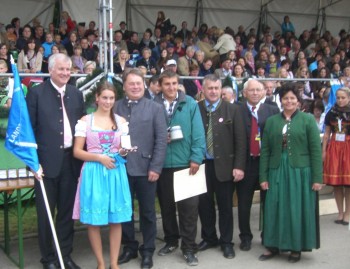 The Central Agricultural Fair, which takes place every 4 years in Munich, is a showcase of the Bavarian agriculture, especially livestock production. The cattle breeders day was held this year on the 24th September, with 120 cattle and their breeders competing for the best animal in show. The Bavarian beef cattle breeders were represented by 35 animals from 11 different breeds. The Angus bull DM Rossiter C182 was the winner in its class. The bull was born 2007 in Donaumoos, a pure Aberdeen Angus (AA) bull descending from the Scottish Aynho Rossiter Eric B 125 and the Scottish cow Wedderlie Kensue A 239. For him the breeder Martin Delle received on the “Day of the Animal Breeding” by Prime Minister Horst Seehofer, the Gold Medal of the Association of German cattle breeders.

The Rossiter C182 Angus bull semen is now available for purchase in Romania, at the company Karpaten Meat.